You are here:
Industry NewsPress Releases 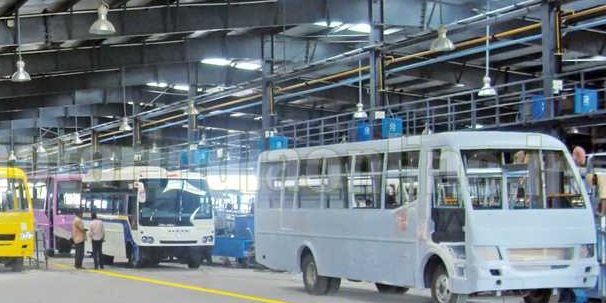 The Indian bus industry has always witnessed a cyclical trend, but persistently maintaining its bandwidth, growing steadily in spite of experiencing pitfalls every three-four years. Of late, we see staff application getting redefined, with an appreciable growth of 15 per cent year-on-year growth rate (RACE analysis: approximately 4,680 units sold for staff application in 2012-13).

The overall Indian bus market experienced a decline in FY 2012-13 (84,817 units), showing a de-growth of about six per cent compared to FY 2011-12 (90,095 units). The setback was due to the economic slowdown and decrease in demand owing to factors like fluctuating fuel prices and cut-down on operations by tourism, travel and corporate companies. Conversely, the cyclicality shows its dominance yet again, setting back the trend for the adequately growing bus market in the next two years. The bus segment is projected to grow at a year-on-year rate of seven per cent in FY 2013-14 and 10 per cent in FY 2014-15. Foreign OEMs foresee a huge potential in the Indian market, with the governmental policies facilitating their entry through the 100 per cent FDI route. A few foreign bus OEMs like Volvo, Mercedes and Scania have seen their entry fruitful over a period of time that they established their manufacturing base here to mainly cater to the Indian market and partially to the export market. However, Ashok Leyland and Tata Motors will still continue to be the market leaders throughout the forecast period 2013-18, with their pan-India presence, diversified product portfolio and a broader customer base. The premium segment for buses will however be completely tapped and reserved by the market entrants like Volvo, Mercedes and Scania in the near future.

The body building giants such as S.M. Kanappa, MG Group, Sutlej, TVS-Irizar, KMS Coach, Veera Vahana, ACGL and Mungi who have been the preferred choice of OEMs, fleet operators and SRTUs, are suffering deficit in the market with low order numbers due to the current economic slowdown. However, a few body building firms such as MG Group and Alma Motors are supposedly gaining attention among the body building fraternity by decreasing the delivery-lead time for their customers. This is found to be one of their unique selling propositions and customer-comfort strategies. Such an initiative might gain immense popularity in the market.

Bus OEMs are planning to manufacture bodies in-house in the longer run to take advantage of excise duty, and tax benefits and also to enhance their profit margins. Such a market disposition may be a strong threat to the reputed body builders who have been in association with OEMs, forcing them to shift their focus to the private and SRTU markets. Body builders who are very close to their customers in the specific geographic areas are trying to upgrade their offerings as fully built. Nevertheless, small players in this body building fraternity are said to have been least affected due to this makeover from the bus OEMs. The growing area in the bus application industry is the perennial inter-city segment, followed by mofussil which is expected to achieve a nominal growth in the short term. The expansion of metro cities and continuous improvement in road infrastructure are encouraging STUs to deploy more vehicles. The special application segment covering school, college, staff, ambulance and other captive government buses expects immense growth prospects in the short and mid-term, with a CAGR of seven per cent until 2018. The segments that are currently driving the special application are school, college and staff buses which now enjoy 60 per cent market share.

In a short span, the staff transportation has become a key focus area, supported by driving factors like impending investments into expansion of SEZs and industrial zones, as well as companies providing their employees hassle-free transportation in order to motivate and retain them.

Most companies which provide transport facilities for their employees are now concerned about their safety and comfort. With the expansion of SEZs, more companies are emerging in metro-cities, increasing the mass transportation of staff to significant levels. In fact, companies are now providing a transportation model that meets all the basic requirements of the employees.

In addition, the companies are demanding a lot of safety features like first-aid box, fire extinguisher, emergency exit door, seat belts, GPS track and trace and surveillance cameras. This poses a lot of challenges for fleet operators in terms of procuring new chassis, building the bodies, designing interiors, and providing customized features specific to different companies. This kind of customization will increase the cost which is not getting translated into the required returns. Fleet owners work this out with profit margins as low as at two per cent to expand their fleet and keep their brand name up in the transportation market.

In the past, industries used to have their own fleet and were operating them as per their requirements. This captive model incurred a huge loss due to improper scheduling and maintenance of buses, which led them to sell the buses and outsource the fleet completely. High capital costs, mismanagement and depreciating market value for buses are the core drawbacks of the captive model, which most of the companies couldn’t sustain over a period of time.

With the entry of MNCs and IT giants, the scenario was given an entire new dimension where outsourcing of non-core activities became the order of the day. This yielded better results, warding off unwanted costs and risk-free transportation model. This model is now very well acclaimed all over, with a trend change witnessed among the industries and manufacturing companies in the emerging scenario. Generally, contracts are being framed based on mutual agreements between the companies and fleet operators, which are irrevocable for a period of three years. More often, the contractual period is on an average for three years, which might get extended to a year or two based on the satisfactory levels of the fleet operators’ performance.

Currently, the contract enables the company or industry to choose the chassis and body builder from their preferred list, devising basic safety features like first-aid box, fire extinguisher, seat belts for the front row passengers and FM radio or a CD player as an additional feature. This trend is because of reliability of the chassis and familiarity of the company’s specifications by the designated body builder. Ashok Leyland’s Viking 222 chassis is more commonly preferred in the southern region, while Tata’s 1612 chassis is preferred in western and northern markets.

Staff buses are designed with a seating capacity of 40 reclining seats for IT companies and 48 non-reclining seats for manufacturing firms. However, the top level executives and management personnel are provided with premium air-conditioned buses with ambient space for legroom and baggage. Fleet operators prefer manufacturing companies as they run two-three shifts a day as compared to IT companies which operate a single shift per day, thus leveraging their potential to attain maximum profitability.

According to the RACE survey, roughly two per cent of staff buses are currently equipped with air-conditioning, catering to the premium staff transportation market. In the near future, a few IT companies are looking at shifting their existing fleet to A/C buses in the down south market where employees suffer from hot and humid weather conditions. Such a shift in focus can be observed in the future from manufacturing companies as well, slowly migrating to A/C buses at a nominal increase in the price per km. Presently, the cost per km goes up by an industry average of 20 per cent for A/C buses compared to non-A/C buses. RACE predictions show that the A/C bus volume in staff transportation application will have a five per cent share at the end of forecast period 2018.

“The emergence of unclear demands amongst various companies complicates the requirement levels, standards for adherence, flexibility of operation, and the cost of operation for fleet owners. Currently, at RACE, we have arrived at the benchmarked vehicle standards for staff transportation, which can set uniform guidelines to decongest the above witnessed hurdles”, states Mr. Rajesh Khanna, COO, RACE Innovations.

Mr. Krishna Chaithanya, Assistant Manager – Research and Consulting, RACE, says: “We foresee the staff transportation segment to become a perennial segment in the future, creating a niche market for itself, as it is perceived by the companies as a brand building exercise and a motivating tool to keep up their standards in this competitive environment”.